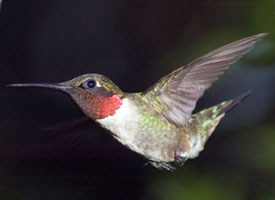 There are 328 documented species in the hummingbird family, which are confined to the Western Hemisphere. The Ruby-Throated Hummingbird is the only species to nest east of the Great Plains. This little gem is 3-4” long and can beat its wings 53 times a second. With an average life expectancy of 5 to 9 years, these hummingbird winter in southern Mexico and south through central Costa Rica and migrate to the north during the summer months.

Red hummingbird feeders filled with nectar, a mixture of 1 part sugar to 4 parts of water is sure to attract hummingbirds into your yard. They need the nectar for energy, especially in spring after their long migratory journey. They also feed on small flying insects which they catch while darting into a swarm or by diving from a perch. Plants, such as red, tubular flowers and other strong nectar-producing flowers, are also a natural way for them to get nectar and will attract them to your yard. Thank you to The Macaulay Library at the Cornell Lab of Ornithology, Ithaca, New York.